Universe in the Park

Universe in the Park is a NSF-supported outreach program led by Prof. Eric Wilcots at the University of Wisconsin – Madison. During my time at UW-Madison and later at UW-Milwaukee I was and still am actively contributing this program by running, often with another grad student, more than a dozen of these events.

read more about the Universe in the Park program or have a look at some photos and even movies taken during some of the events.

The Transit of Venus in 2012 brought more than 500 visitors to UWM to see this once-in-a-lifetime with their own eyes.

On February 15th 2013 I was guest on the “Wisconsin Tonight” show on TMJ4, talking about asteroids and meteors in connection to the erath-grazing pass of asteroid 21012 DA14 and the meteor that exploded over siberia.

Engaging with the public and future student generation:

During my time at UWM I also have the chance to interact with individual students of groups of students that are interested in pursuing a career in physics and/or astronomy. 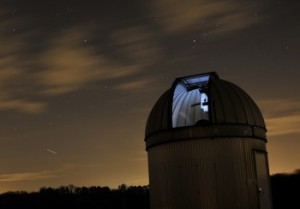 A talk on some astrophysical topic (e.g. our solar system)

Presentation of the night sky, constellations and selected objects (sun, planets, star clusters, planetary nebulae and galaxies) in the planetarium

A tour around the telescopes, introduction to what different kinds of telescopes there are, and how they work

Poster gallery (in german only)

All posters and the images they are showing have been obtained by R. Kotulla and H. Meyer using the institute’s 50cm telescope.